Church on the Move’s Christmas Rehearsals and Live Production

One of the things Church on the Move has been focusing on doing over the last few years is to play different sounds live as much as possible. In the past, they built their own tracks that had a bunch of the sounds they were trying to achieve. But more and more they?re relying on live instruments.

Andrew Stone and his team are purists, so they love getting the organic real sound instead of relying on backing tracks. So this year for Christmas, even though they had over 110 inputs, they were excited about the sound they achieved. There were chimes, bells, suspended cymbals, a piano, big drums? There was hardly any electronic percussion.

This of course made things rather complex. With an added string quartet and each new member having their own in-ear mixes, there were a lot of details and areas where things could go wrong.

Fortunately, there weren?t other things to add to the mix making the production more complicated. Unlike previous years, this year?s Christmas services were much like their normal worship services. No huge apparatus, no set or scenery changes? It was just the typical weekend on a few steroids. From that aspect, it wasn?t that technically difficult to execute.

They did, however, begin recruiting their tech team in early October. They specifically asked which volunteers would be willing to work all services on Christmas Eve, so they wouldn?t have to have tons of different people at the 10 days of rehearsals and dress rehearsals.

Because the rehearsals were also happening in the middle of their normal weekend services, it required setting up and tearing down the stage multiple times. They set up split-shift scheduling where one team would work 12-15 hours then another team would take their place?throughout the day and night. This included their four full-time interns, staff members, and devoted volunteers. Needless to say they all became LED experts at the end of this preparation.

Check out Andrew?s schedule to see how insane this experience was. 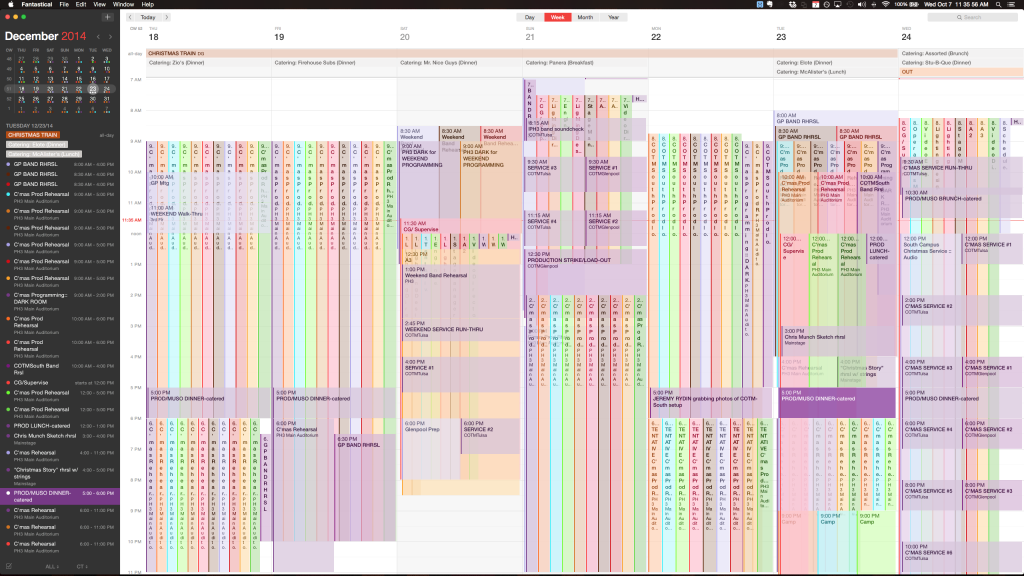 Without that great process management and their devoted volunteers, this wouldn?t have been possible.

They have a group of people who love being part of Christmas services. They?re the types who even take time off or use vacation days to be part of rehearsals.

Andrew has found that people like to be part of something, big or small, that feels greater than themselves. They feel a win from that. If a volunteer comes in normally feeling like there wasn?t a win, they?re probably not as apt to return next week. Thus, Church on the Move tries to make each weekend feel like a win for everyone involved. They want their volunteers to be a success so they feel like they?re part of a bigger?win.

A lot of times, churches have every ability to make an awesome experience, but they do things that just don?t work for them. That leaves volunteers feeling like they could have experienced something better at home watching TV. That doesn?t mean they don?t want to come to church anymore, but it?ll leave them less excited to sacrifice time out of their week to volunteer for something extra like Christmas services.

The key to remedying this, to Andrew, is to start getting little wins to keep people motivated. Then as you gain little bits of ground, it allows the volunteer group to keep going; it doesn?t necessarily have to be big like the big church down the road.

Here?s the take home for you and your church this Christmas season: How can you create little wins for your team leading up to Christmas that will get them excited to be involved?