The folks at Willow Creek had a huge challenge in designing their stage for Christmas. They had three unique, distinct sections in their service. How do you decorate the stage for one section without giving away the next portion??How do they visually backup the Christmas carols without giving away the feature film? How do they enhance the visuals of the feature film without distracting the audience? And how do they transition all these elements in an hour and twenty-minute service?

Blaine Hogan, their creative director, was intrigued by a photo he?d seen. It was a picture of a diamond light bulb exploding. He was fascinated by the angles of the glass. We were once that diamond. Then sin came and shattered us into many small shards ? pieces of the original diamond light bulb. They wanted to recreate that feel on the stage.

So they mimicked that look using sheets of white Coroplast. They cut them into various shapes and sizes, lined them with 1×4 lumber, and put them behind the orchestra and band ? below the large movie screen. Before the feature film, they lit the shard elements with different lighting.

They accomplished this by using six different 1500 lumen projectors. They mapped the video using ProVideoPlayer on six different nodes. That allowed them to fill their shard screens with visuals ? at the expense of cords everywhere.

So they rented a giant fibre optic curtain to fill the giant black hole. This allowed them to put a starry night on their stage and avoid giving away the excitement of the feature film.

Since the feature film was scored live with a 24-piece orchestra, they tried to pull some inspiration from the ?Star Wars: In Concert? tour. In the tour, they showed film, but highlighted the orchestra. This was their original goal.

But as they explored the idea, they realized the reason that worked so well is that many people were already familiar with the Star Wars films. They were showing a brand new film. After tossing the idea around, they realized that would distract from the message of the film. They opted to go with simple stand lighting on the orchestra and without splashing scenes of the orchestra on the big screens. They left the stage dark to let the feature film shine.

Even though that meant cutting many light cues they had spent a long time programming, it did more to help the feature film and make that message memorable.

They tried this year to do red and green on their stage. Those are the typical Christmas colors, right? Unfortunately, it didn?t look good.

So they opted for blues. Their lighting and visuals all centered around a blue pallet. And they just adjusted the fonts for the lyrics and graphics to make it feel like Christmas.

While the projected scenes on the shard stage design was incredible, they spent far too much time trying to put it together. Considering it was only used a few times during the movie, Todd Elliott wished they had done something different or had used it more during the film. 80 percent of their effort only yielded 20 percent of the effectiveness of the service. 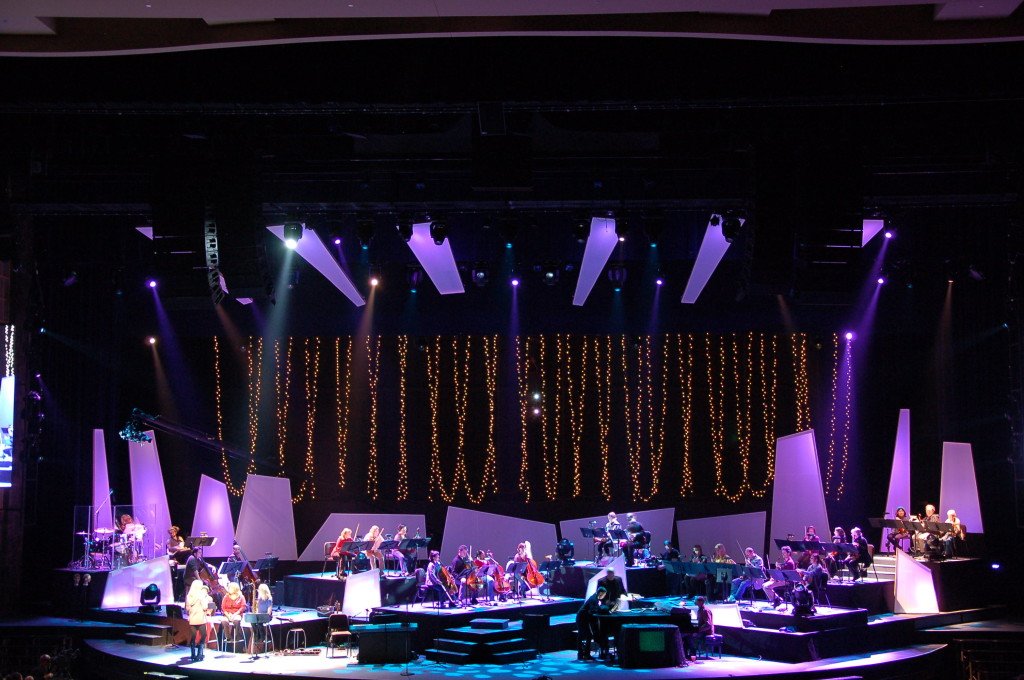 One reply on “Stage Design and Lighting”

Looks incredible. With the different issues described, it’s hard for me to see without more pictures or video of the video projection on the shards. Sometimes you just don’t know the effect an element will have (or not have) until it’s too late to change it.